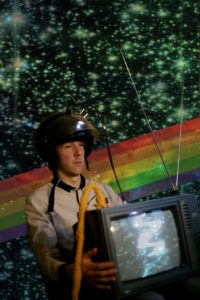 Who are you?
Daniel Eugene Lacey-McDermott

Q: The Beginnings – When did you start making electronic music?
I was the year 1995 when I got my hands on Propellerheads reason and started to make really bad trance music, holy shit i’m glad i progressed from there. I learned a lot about music and sound though.
Q: What or who inspired you?
I was similarly driven by the over consumption of coffee and the desire to amuse and perhaps surprise myself.
Q: How would you describe your style?
Technically i like to call it non-pretentious epileptronica with a touch of mind-asplodingnes and deep metaphysical afterthought. But there is an important emphasis on making music that isn’t entirely predictable, Also there is a lot of 8-bit aesthetics and intensity.

Q: Your music seems very much inspired by INTERNET culture. How long have you been online? What do you think of the other music styles and artists that celebrate 8-bit or early internet aesthetics?
The internet is a series of tubes, and in my opinion the most powerful tool mankind has to date. Internet culture is often bizarre and surreal and i really like the bizarre and surreal.
I like it a lot and it goes hand in hand with the ideas and thinking that lies behind Captain Credible.
When it comes to 8-bit aesthetics i must admit i have always had a weakness for old sound chips and early 80s cheap FM synthesis. but i think you can tell when artists are using this creatively and when they are just throwing in some fake shit because its hip.

Q: How was your grasp of the audio engineering & production at the beginning? How did you learn producing? Is it all self taught, from the internet and tutorials or mentors and teachers?

I’ve always been a bit of a sound theory nerd, but they didn’t mean i was any good at mixing. When i listen to mixes from back in the day it sounds like a thousand kittens on coke bathing in a giant blender in the centre of a huge empty concrete bunker. But when it comes to the composing and beat creation side of production I have always payed attention to detail and spent ages programming on the millisecond level until i get what I like.
I suppose i have musician friends who I use as mentors but the internet and myself have taught me most of what i know about life the universe and everything.
Q: You´re not only a musician but also a soft and hardware developer . Wow. How come?
(Now its time to make mad claims and pitch your epileptic bird choir generator 🙂
Well i suppose the whole reason i got into electronic music and not banjo music (or any other real instrument based music) is because i wanted the creative freedom to do anything i wanted to in my music. So writing bits of software to do things that existing bits of software don’t do is a natural extension of that.
The hardware (audio machinery) started when i was asked to play concerts and i realized i didn’t want to / couldn’t 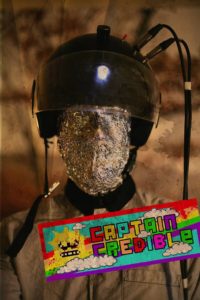 use a mouse and qwerty (qwertz) keyboard to play that shit. The Sex Pistols wouldn’t be so fun to watch if they showed up to play a gig with nothing more than a cassette player, and i don’t think electronica should be performed with just the trackpad on your macbook pro (wich was kind of the norm when i started out). Anyway, i felt i had to make some instruments, both to make it physically possible to play what i wanted to, and to make it more interesting to the audience than windows media player. And i had to make it myself because i didn’t want my creative approach to the live performance dictated by the features and functionality mass produced crap from multinational corporations like Korg, novation and Native Instruments
One thing led to another and i ended up with a lot of homemade gear and a robot that plays drums. And everything gets trashed all the time (usually during live performances but also often by the likes of ryanair) so i’m constantly repairing it all. wich would be a lot more difficult if i hadnt made it myself in the first place.
Here is a piece of audio machinery for your curiosity and amusement:
http://www.youtube.com/watch?v=yJ4MxNluD8w
Q: The design on your hardware is gorgeous? You did that yourself?
Yes. The casings are usually made from things i find lying around, like old tea tins and cheapo toy instuments that i sometimes paint. One of the main units i use live is made from the wall mounted heater that was in the the flat that we moved into a few years ago. It has a slightly mystical yellow tint, i’m pretty sure the previous tennent died of cancer. I also use a helmet that i found hanging from a tree in a graveyard on my way home from a party in Oslo.
Q: Tell us about your VST Plugins?
They are the pinnacle of human digital achievement, i spent decades perfecting them and they are extremely expensive, but i have cracked them also, and the cracked versions are available on my webpage, or the piratebay.

http://www.captaincredible.com/VSTplugins.html
Q: Tell us about your setup. Are you using mostly software or hardware these days?
When i make music its a bit of a mix, I program some stuff on an old 8-bit Nintendo Entertainment System, and i use some hardware synths, but most of it is softsynths, diy code and pooters. Live i use my home made gear (midi controllers, synths, robots…), a computer and my fist. Along with some magical helmets and a mythical miniature unicorn*
*invisible
Q: What are your five favorite instrument and effect plugins?
1. Proto PSG by g200kg – The insides of a synth
2. Whbzz Noise
3. Blittr by ArcDev Noise Industries
4. Harmonic Ping Only by Magnus at Smartelectronix
5. E-Phonic LOFI
There is an insane amount of really unique and interesting free homebrew and indie VST plugins out there and i prefer many of those to the big mainstream expensive over advertised ones

Q: Who are the artists who have influenced you the most right now?
John Cage, Aphex Twin, Squarepusher, Deerhoof, Nicola Tesla and Batman
True story
Q: What is your typical work schedule like?
MONDAY: Make work schedule
TUESDAY: burn work schedule and make music instead
WEDNESDAY: place 1x live pidgeon in cupboard
THURSDAY: tape magnets to ancles and hold iron bar above head and fly 4 science and profit
FRIDAY: be positive, you are a unique and beautiful person!
SATURDAY: remove magnets from ankles and go to “sleep”
SUNDAY: Return from magical cave of the undead cat-men and have pancakes
as you may have noticed by now, i’m not so good at schedules.

Q: How do you come up with those cool track names?
They are usually working titles, so its just the first thing that comes to mind when i click “save” when i started a new project.
Promotion / Career advice to other musicians
Q: How do you promote your music? Are there any music promotion services you can recommend?

I just use the facebook and send things to blogs and the likes.
I have never tried any “promotion services” 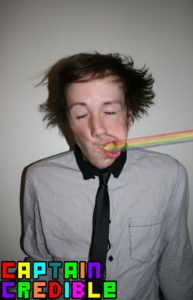 Q: How do you distribute your music? Are there any digital distribution services that worked for you which you can recommend to our readers?
I think i use something called tunecore that i’m very happy with, oh and piratebay, piratebay works quite well.

Q: What social media or websites do you use for music promotion
Live Gigs
Facebook, twitter… and whatever blogs want to write about it.

Q: Let´s talk about djing and live gigs. Do you remember your first gigs? How were your first experiences with finding and playing gigs.
Besides the usual stage nerves that probably almost everybody has on their first handful, if not cratefull of gigs, I remember being really excited about how much fun it was to play Cpt.Cred gigs and just wanting to play more.
I’ve allways just played when i’m asked to, i suppose i was a bit lucky that way, not having to try and book gigs myself.

Q: Was it complicated finding a booking agency or clubs to play at and how were the first gigs received? What´s it like on tour for you?
I remember the first gigs were a bit daunting because the music was different and i had no idea how people would react or wether they would like itat all.perhaps people were expecting something a little more mainstream and less intense, perhaps. I was surprised when everything from metal heads to old ladies seemed to get a kick out of seeing the show.
booking and stuff kind of sorted itself out without much effort from my side. But i know it can be hard. and i think playing gigs and showing people your stuff is key to getting to the state where you can live off your music. Besides having good music of course, or being Bieber.
Q: If you could only take one piece of gear on the road with you besides your laptop, what would it be?
shit… one piece… erm, well I’d have to build something really huge that inegrated a whole bunch of crap. Like a great big frankenstein of things that might normally be considered different pieces of gear but that now have merged and irrefutably become one. phew…
Q: What is your favorite animal?
Tardigrades, They can survive extreme temperatures and are the only animals that gone to space and survived. Outside the spaceship. Without a spacesuit. the fucking vacuum of space!
Q: What would your personal dream life look like?
Miniramp in the livingroom, whisky on the organ and a MIDI socket in my forehead. Oh and i would …
Q: And what would be your worst nightmare scenario in life?
The Future
Wave after wave of mad goats rip at my flesh and scream clever insults at me while my face explodes in slowmotion, and the pope (god bless him) draws swastikas and penises on my exposed skull with a felt tip pen.
That or me or my family addicted to heroin
Q: When we interview you in one year, where do you see yourself?
Hopefully i will have completely transgressed the unisphere and collected ALL the energy crystals witch will have given me the power to see into the past and fire rainbow coloured lasers from my nipples. But i will still be playing concerts and with the nipple-rainbow-beams added to the lightshow it will be less crap and more epic than it is now
Q:Do you have anything to add?
Check out this vid i found on the internets
http://www.youtube.com/watch?v=TAI4t8AMw2o